Moved by their intensely intimate and emotional duet of "Shallow" from "A Star is Born", it isn't hard to see why Gaga's and Cooper's performance became the most talked about of the evening. Naturally, we just HAD to pick this moment as our number 1 highlight!

As we have come to find out from J. Lo's Instagram posts, Bradley Cooper was very nervous before heading to the stage. She later discloses to the public that she felt compelled to give a few words of reassurance to the singer:

“The song is so beautiful, when [the audience] hears the first few notes they’re going to start applauding. So don't worry. Just deliver the song".

And boy, did Cooper deliver that song!

Euphoric, Spike Lee leaps into the arms of Samuel L. Jackson for a heart-warming embrace as "BlacKkKlansman" is announced the winner for Best Adapted Screenplay.

A true inspiration to multitudes of African-Americans and peoples-of-color, Spike Lee received numerous Tweets throughout the evening in support of his relentless dedication. One such appraisal comes from a key figure head in the community, Kimora Lee Simmons: 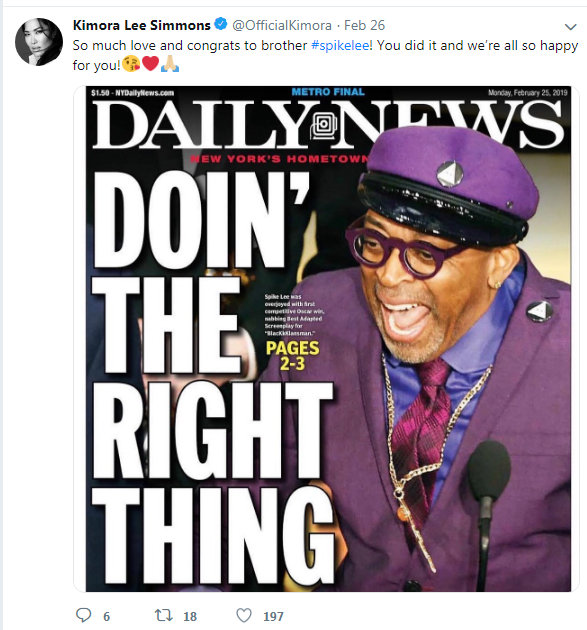 Undoubtedly, the Academy's recognition of Spike Lee's work is a strong signal that the industry is taking a more progressive direction. For many, last Sunday was a historic moment that will pave the way for other up-and-coming black artists.

As Lee's first time winning an Oscar, we can hardly contain our excitement for the writer-and-producer; his electric personality combined with his evoking speech has decidedly left its mark in the Award Ceremonies night.

Both Melissa McCarthy and Brian Tyree took their respective roles as presenters for Costume Design Award very seriously. As the segment suggests, we already expected to see some flamboyant costume being flaunted about. However, the comedian and actor really took it to a whole 'nother level that left quite the impression.

Everyone had a say in it. Some loved the audacity and extra-ness that came with McCarthy's train full of rabbits, an apparent nod to "The Favorite"; others, (ahem, critics and designers) not so much. They felt that the choice was an open mockery to their career and a tad bit out-of-place considering the prestige and grandeur of the event. We mean, we can see why the designers weren't too happy, but at the same time, we felt the presenters didn't mean to offend anyone. Let's keep it light, shall we?

As for our team, well, how can we put it?

This is the first time that a Mexican movie wins a Best Language Foreign Film Award -- though several others have received nominations. "Roma", a Netflix Original drama set in the 70's, was a daring move for Alfonso Cuaron to make. For starters, asking for a 15 million loan for production and choosing the unusual language fusion of mixtec and Spanish, the producer-and-director set quite the challenge for himself.

However, we strongly believe that the storyline (following a Native live-in maid) in conjunction with the black-and-white shots have nicely worked out in Cuaron's favor. Thus, when he won not one, but three awards, we can hardly say there was much surprise. Second-time Oscar winner, Cuaron, can now boast of a Best Director, Best Cinematography and Best Film Director Awards this year!

Honestly, we have to say out of everyone, we were rooting for Regina King the most! She is so charismatic and super talented, the latter becoming evident in her supporting role in "If Beale Street Could Talk".

In her acceptance speech, she made sure to thank writer-and-director Barry Jenkins as well as the original novel's author James Baldwin for her current success. It is evident that she truly cherishes her profession and is very appreciative of her team, as she closes the night by saying:

"I’m an example of what it looks like when support and love is poured into someone”.

What a lovely speech! We hope this Oscar Award is just the first of many more to come!

It's exhilarating to say the least that another Canadian short film animations takes the Award! This year, the winner went to Toronto-raised director, Domee Shi.

Using her chinese background as reference, Shi built the storyline based on her own experiences growing up as a Chinese-born Canadian. It has become evident that this is a very personal project for Shi as she reveals that her own mother acted as inspiration for the mother figure seen in the animation!

We think "Bao" may possibly open up new doors in the film industry, wherein different cultural fabrics are used to shape what is shown on the screens. Whatever direction this takes, one can't deny the relevance this will have to up-and-coming directors who wouldn't otherwise have had a chance to voice their narratives.

What were your favorite moments for this year's Oscars? Do you think we missed any highlights? Had them in the wrong order?

We don't know how you feel about 2019 but, at Beauty Route, we certainly can't wait to see the promising changes we're expecting for next year's Oscars!

And before we sign off, one last thing: let us know what you think in the comments and keep posted for more weekly content!